I'm coming down with a cold, and it's, like, a really bad time for me to be sick. Luckily, these little guys have fruit to offer me, because they know there's nothing like vitamin C to prevent a bedridden weekend. Thanks guys!

Note: We're not talking cats wearing fruit helmets, here. For that, you'll need to hit up Buzzfeed, which, to be completely transparent though it's blindingly obvious, is where I got the idea for a a quirky listicle based on something I saw early in the morning on Reddit—the mess of hair that is apparently responsible for Buzzfeed's Samsonesque strength. Hey, I don't resent them for that! Really, I'm happy to see that they're doing so well. I just think that maybe it's time we less "downtown" publications got in on the action, because let's face the music here, you guys are suckers for pictures of cats, you'll click through a whole slideshow of them probably, and we're not really doing our level best as a business if we didn't try to exploit that part of you even as we educate on gay youth struggling on the streets, City Hall's slush fund incompetence, and endemic poverty, are we?

Bite into the eight cats with fruit after the jump. So that's where watermelons come from . . . (via vinomatt/Reddit)

This guy knows. (via AtBreak.com) How could you turn her down? (via Your Secret Admiral)

"Snuffles, you run a post; Tabitha, you run a flag route; and I'll sit here and eat this orange. Ready? Break!" 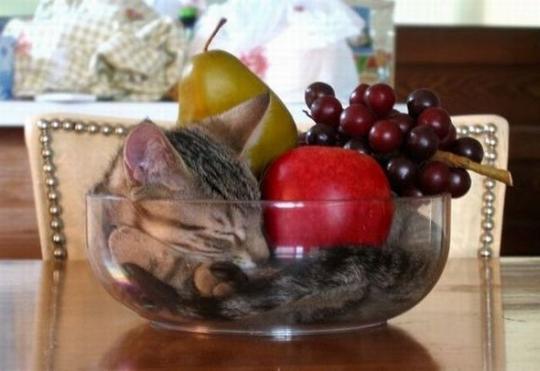 I'm not sure if I'm more impressed by the impressive contortion or the impeccable fruit selection. (via ZonSpot) Cats Fighting in a Larder (1663) by Paul de Vos (via a Russian stock photo site that tried to infect my computer with something, so no link)

This one is actually just me this morning. (via Cup of Zup)